I did wonder about that, but there's only one image - the workers under the dam - where there's really obvious movement of people. Even the river shots show very little movement on the water. And the posed shots - the Emir of Bokhara for example - seem to be far too sharp for repeated exposures, and simultaneously too well registered to be separate cameras... I suspect - but can't prove! - a triple camera with RGB filters, much in the manner of stereo cameras. Multi-exposure cameras were prevalent at the time...

Hmmm, maybe you're right - or probably I bet they're a mixture of techniques. There's definitely one shot where it looks like a baby has crawled off half way though the shots!
www.daveparryphotography.co.uk
twitter.com/TheDaveParry
Top

Actually, the probability is that they were taken with one of several "one shot" cameras that were available. Here is Henri Gaud with one of his :

If it interests you (and you can either read French or use Google translate, then Henri's site is full of all sorts of information on the process.

There's also this site, dedicated to Madame Yevonde, who used such cameras for portrait and fashion photography.
Reassure yourself - stroke an Ebony
Top

Reading the info on that link about the russian shots it says:

Yes, there were other cameras, which were essentially three boxes side by side, which I gather you had to open the "shutters" one at a time. Aren't you glad they invented colour film?

Mind you, the results I got from three shots, one after the other, were something special; very much like printing colour neg film, where you decide the rendering yourself but with the same dynamic range as B&W film

Colour? It's a passing fad. No good will come of it.

I need to spend some time on that site (with Google - je parle Francais comme un vache Espagnol) but today is a day to go paragliding. Somehow, I can't see an easy way to add a 5kg camera to a 20kg aircraft...

p.s. did I post a link to my technique for *2* filter trichromie (dichromie?) some time ago?
Top

Was reading up on this today after I saw another link about it. Turns out the camera setup used was like this: 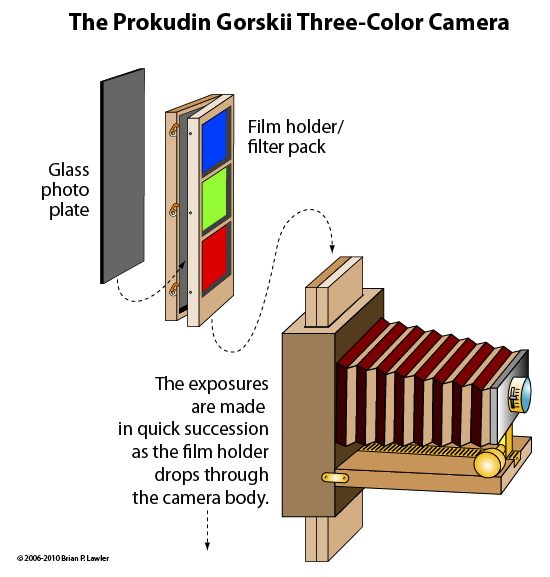